This book supplies a simple, memorable, and effective formula to solve problematic behaviors in the work environment and life in general. An invaluable guidebook, it will help readers move beyond mediocrity and achieve happier, more successful lives. 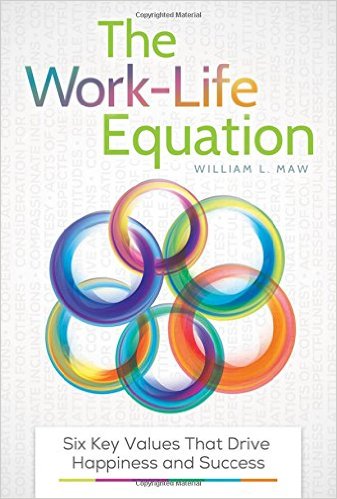 The Work-Life Equation: Six Key Values That Drive Happiness and Success 2015
About This Book
Details

"The Work-Life Equation takes us back to the core principles that we learned as children, but forget as adults. If more workplaces were marked by Bill Maw's values of cooperation, consideration, compassion, courtesy, respect, and responsibility, we'd all be happier and more successful." (Adam Grant, Professor of Management, Wharton School of the University of Pennsylvania and New York Times best-selling author of Give and Take) "Bill Maw isn't being metaphorical when he uses the word ‘equation'―it really is an alphanumeric riddle: (H, S) = (4C, 2R). And by the end, it all makes sense." (Dennis Kneale, former anchor, Fox Business and former editor at Forbes magazine and The Wall Street Journal) "Maw has created a valuable blueprint for a happy life by fleshing out the definitions of words you thought you knew the meaning of. If you're unhappy, read this book." (Robert D. Smith, Author of 20,000 Days and Counting) "A source of sound advice, given thoughtfully with humour and humanity. An easy read full of things that if you were lucky as a child, your parents taught you over breakfast and dinner, and which we often forget or ignore as we grow older." (Iain Mackay, Group Finance Director, HSBC Holdings plc) "From the breakfast smoothie of champions to the importance of investing early in a life coach, Bill's book is full of illuminating anecdotes and practical takeaways to help young professionals fast track their careers in a sustainable and fulfilling way." (Laura Du, Princeton University Class of 2014; Corporate Contacts Manager, Business Today)
Featured Books