The Chemistry of Strategy: Strategic Planning for the Not-Yet-Fortune 500

This book offers readers something they can’t find in today’s most popular business books: a practical, tested perspective and strategic planning process that works for the legions of companies that don’t have the resources of an Apple, GE, or P&G. Readers will gain a deep understanding of what strategy and strategic planning is; why it’s critical to their organization and their own success; and how to create, implement and sustain a strategy that literally turns vision into reality.

Executive teams are searching for the magic elixir of success. The appeal of such alchemical magic is obvious. If a company’s managers do just this one simple thing, or follow this simple, easy plan, they too can enjoy profit margins and stock prices just like the “it” company of the moment.

The process of successfully growing an organization is like mixing chemicals together to create a reaction. Ask the typical executive to name the most valuable tool in the process of creating a chemical reaction, and they’ll offer such answers as the quantity of certain chemicals, the quality of the lab facility, the combination of two or more elements and so on. That’s because we tend to be so rooted in tactical thinking that we miss the larger equation.

The reality is that the most important tool in creating the desired chemical reaction – or growing a company – is the formula that describes its “big picture” results.

The primary formula for strategy is simple enough:

This strategic planning approach derives from the author’s own alchemist-like professional search to find the magic formula for transforming the value of companies.

John W. Myrna
John Myrna is a strategic planning facilitator. He has refined a practical, pragmatic, and proven original strategic planning process that is perfectly in tune with the needs and capabilities of small to mid-sized companies and Fortune 500 corporate divisions. He has been a national speaker for the Association of Computing Machinery, and the featured luncheon speaker for the CEO Clubs in Baltimore, Boston, Chicago, Los Angeles and Washington. In addition, he is a Vistage speaker, giving talks on strategic planning in Atlanta, Denver, Los Angeles, and Toronto.
Books of John W. Myrna 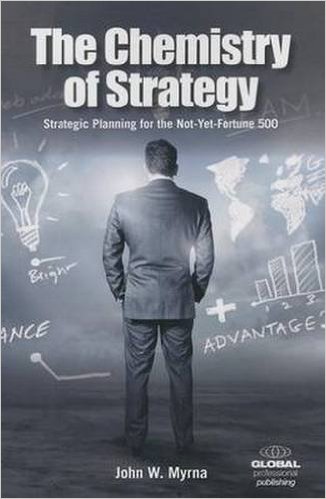 The Chemistry of Strategy: Strategic Planning for the Not-Yet-Fortune 500 2014
About This Book
Details

“The Chemistry of Strategy: Strategic Planning for the Not-Yet-Fortune 500” Cancel reply

There are no reviews yet.