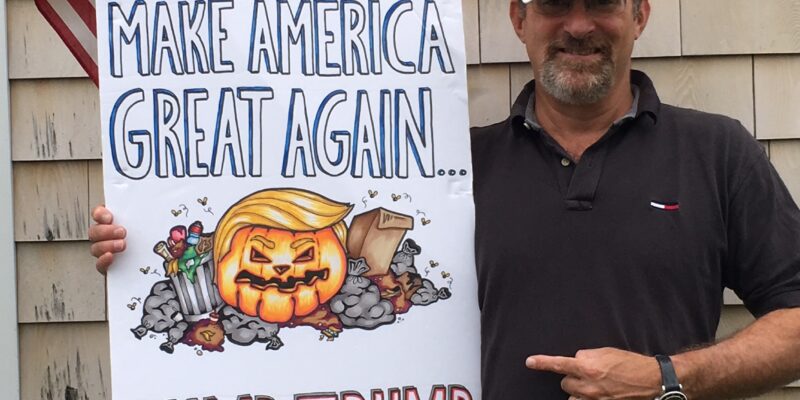 Hyper partisanship, national polarization, party politics bleeding into areas it does not belong, and a dysfunctional Congress are no longer the biggest threats to our democracy. The cult-like, self-identification of Trumpism is beyond political division and is pulling our nation into fascism.

To put our democracy back on the tracks, Americans need to do something our nation has not done in a long time, we need to talk. We need to bring back verbal dialogue between individuals. It is only through true discussion and debate that we realize if we are seeing multiple perspectives or just regurgitating propaganda. Online chats, e-mails, Facebook and any one to many communication may be easy, but they are the wrong tool for our current crisis.

If you know anyone in a swing state, pick up the phone and call them. Send a text and ask for a time to speak. Have colleagues in those states? Invite them to a video conference lunch or coffee break where you can talk about the upcoming election. Too many people are surrounded by a homogenous mindset and may not have anyone they feel safe speaking with.

It is time for all of us to be active patriots and choose to invest our time in having verbal conversations. Start with your personal and professional network and then look to do more. If you have vacation time that will not carry over, use a few days in October to talk with others about our collective responsibility to protect democracy and end partisan self-identification (what enables fascism)

Fascism has always been veiled in patriotism, powered by insecurities, and prioritizes blind loyalty. The question is, will Americans step up to fight this common threat or will we be complacent, consumed by apathy and hope that someone else will save the day?

There is now common cause, for Conservative, Liberal, Moderate and others, to jointly shut the door on Trumpism. Conservatives can still vote for Republicans, Liberals for Democrats and Moderates can continue to not have acceptable options, but we all must oppose Trumpism.

Even if you disagree with someone, ask them to explain their opinions. If they are ignoring inconvenient facts, just ask them to explain their points so you can understand what is behind their thinking? There are topics, such as abortion or capital punishment that we need to agree to disagree for now, as we cannot come to common ground solutions until we are better at listening to each other and ignoring biased media.

I suppress the urge to scream at Trump flag wavers because it is not effective. For those who have already wrapped themselves in fascist garb, they must take the first courageous step out of the fascist current. We help by listening and talking respectively from the shore, not pulling or pushing.

Start with acknowledging that Trump has done some positive things. Take Covid-19 as an example and how travel between China and other hot spots was prohibited. However, there were hundreds of possible actions. Assume Trump had twenty positive COVID-19 actions, he also had at least 20 negative COVID-19 actions and maybe another 60 things that should have been done. So that is 20 good and 80 misses, which is much worse than a F- and explains why with 4% of global population we have around 23% of global cases and 21% of deaths globally.

During the RNC, people cloaked in Trumpism may have believed those who said Trump had fame and money and was only serving as President for love of country. Unfortunately, for a monstrous narcissist with a colossal ego, the Presidency had to be the next meal, and dessert is establishing a family dynasty.

At the Manchester, NH Trump rally, I was watching bus after chartered bus unload people sans masks, wondering where they were coming from. I can’t fathom from where in very small New Hampshire a resident would bother to take a chartered bus for around an hour ride? Polarized identification drives people to bus into New Hampshire on a summer Friday evening.

For love of country, in respect of veterans, for the chance to heal and work jointly to solve our very big problems, get out there and end Trumpism. Let people know they don’t have to vote Democratic, just no voting for Trump. Also, refrain from voting for all those who endorse Trump, since we desperately need political leaders and problem solvers, not followers.

Steven Borne is a citizen activist in New Hampshire and author of the book Consuming Government: Flywheels, Ideas and Individual Actions to Better Manage the Government Services You Buy. Visit https://www.consumegov.com.